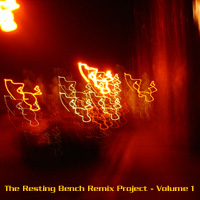 An amazing 30 reworkings of The Resting Bench tracks from artists based all over the globe, some are old Monkey favourites but a great deal of them are new to EMP.

From cool Hip Hop to all out sonic attack its an eclectic bag of fantastic remixes that show just how far you can re-mould without just taking the original track and sticking a Kick Drum under it.

The Resting Bench Remix Project has been supported by Awards For All & Cumbria County Council as part of Monkey Noises, our education programme

The Resting Bench album - which includes the soundscape, the original recordings of the poems and copies of the exhibition artwork is available here

All the original sound files are still available to download under creative commons licence. They are yours to remix, remould and generally have fun with.
They can be downloaded from here so if you want to get involved get downloading and send your finished entry in high bitrate mp3 to - remix@earthmp.com and contribute to Volume 2

Uploaded by sloblizard on August 2, 2006